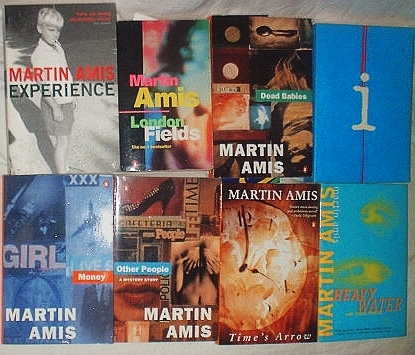 Hundreds of reviews of Amis's novels are available on the web.

The lists that follow are not intended to be complete; instead, they seek to preserve some of the more illuminating assessments.

Users are also strongly advised to register with The New York Times, as many of those links will not otherwise work.

Reviews of The Pregnant Widow

"That Summer in Italy" LINK | PDF

Michiko Kakutani in the New York Times, 10 May 2010. Although predictably negative about Amis's work, this review was so condemnatory that it was itself the subject of coverage in the Guardian. LINK | PDF

"It happened one summer" LINK | PDF

Richard Bradford for the Spectator, 6 February 2010. Bradford was set to release a biography of Amis in October. For various reasons, perhaps including this review, Amis and his agent blocked the publication of that book. LINK | PDF

See also Hensher's article "Martin Amis: A Chronicle of Damage" in anticipation of his interview with Amis at the Ways with Words festival, 20 May 2010. LINK | PDF

On Former Lovers as Inspirations for the novel, Telegraph, 22 January 2010. LINK | PDF

Reviews of The Second Plane

"Martin Amis and the boredom of terror" LINK | PDF

"A Crisis of Testosterone" LINK | PDF

Sameer Rahim in The Telegraph, 2 February 2008.

"Down with mobocracy and misology" LINK | PDF

Jenny McCartney in The Telegraph, 22 January 2008.

"Defender, though not of the faith" LINK | PDF

"Amis's War on Terror by Other Means" LINK | PDF

Reviews of House of Meetings

John Banville in the New York Review of Books, 1 March 2007.

"The Amis Papers: Where is Martin Amis Headed Next" LINK | PDF

"Amiserable: Come on, Martin Amis, You Can Do Worse Than This" LINK | PDF

"The Crown and the Crowd" LINK | WORD

A Profile by Carl Shuker in Poets and Writers magazine, January/February 2007.

"Love, Bludgeoned and Bent by the Camps" LINK | PDF

Daniel Soar in the London Review of Books, 4 January 2007.

"Confronting Death in an Age of 'Horrorism'" WORD

"Reports from the Gulag" LINK | PDF

"Into the head of a terrorist" LINK | PDF

James Button on "The Last Days of Muhammad Atta." In the Sydney Morning Herald, 9 October 2006.

"From Russia with Loathing" LINK | PDF

Catherine Merridale for the Independent, 6 October 2006.

"In trying to be too clever, Martin Amis dilutes the horror of Stalin's camps"

Tim Martin for the Independent, 1 October 2006.

"Out of the Darkness" LINK | PDF

"Lessons from the Gulag" LINK | PDF

Louise Jury reviews "The Last Days of Muhammad Atta" -- once intended to be included in House of Meetings -- in The Independent, 14 April 2006.

"The Many Faces of Martin Amis" LINK | PDF

"Someone Needs to Have a Word with Amis" LINK | PDF | WORD

Tibor Fischer in The Daily Telegraph, 4 August 2003. The most notorious panning.

"Dickens with a Snarl" LINK | PDF

Robert Douglas-Fairhurst in the Observer, 24 August 2003.

"Let Me Introduce You to the Void" WORD

Matt Thorne in the Independent on Sunday, 31 August 2003.

"Leader of the Pack" WORD

Alan Hollinghurst in the Guardian, 6 September 2003.

"Back to Blighty" WORD

"Women May Be From Venus, but Men Are From Hunger" LINK | PDF

Michiko Kakutani in the New York Times, 28 October 2003. Opening sentence: "Martin Amis's new novel reads like a sendup of a Martin Amis novel written by someone intent on sabotaging his reputation."

An assemblage of excerpts on Yellow Dog and the Man Booker Prize competition.

Reviews of Koba the Dread

"Recounting the Suffering of Russia Under Stalin" LINK | PDF

Michiko Kakutani in the New York Times, 26 June 2002. Excerpt: "Koba the Dread, the title of Martin Amis's latest book, refers to Joseph Stalin; 'the Twenty Million,' to that monster's many victims, who perished in his purges, in his gulag, in famines and in his campaign of forced collectivization. The 'Laughter' Mr. Amis refers to is a literary construct — dealing with the absurdities perpetrated by Stalin, and the need to forget those surreal horrors — and therein lie many of the problems of this self-conscious and sometimes self-indulgent volume."

Christopher Hitchens replies to Amis's "Letter to a Friend" in Koba the Dread.

"The Need for Memory" LINK | PDF

Johann Hari in the Independent on Sunday, 8 September 2002.

Jason Cowley in the Observer, 8 September 2002.

Reviews of The War Against Cliche

"Writers Martin Amis Admires, and He Should Know" LINK | PDF

Richard Ingrams in The Observer (29 April 2001); scroll down to "Rude Health for Amis"

"For Writers, Father and Son, Out of Conflict Grew Love" LINK | PDF 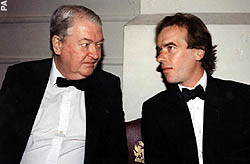 "Will They Survive?" LINK | PDF

D.J. Taylor in The New Statesman

Andrew Roe for Salon.com (26 May

"Making a Name for Oneself" WORD

Julie Burchill for The Spectator.

"But First--Are You Experienced?" LINK | WORD

Bob Chaundy on Experience, celebrity, and Amis's relationships (12 May 2000).

Nathaniel Rich for The Yale Review of Books (Spring 1999).

"Not Such Light Reading" WORD

"From the Ridiculous to the Sublime: The Early Reception of Night Train" WORD | PDF

James Diedrick for the Authors Review of Books (16 November 1997)

Reviews of The Information

Michiko Kakutani for the New York Times, 2 May 1995. Excerpt: ''By turns satirical and tender, funny and disturbing, The Information marks a giant leap forward in Mr. Amis's career. Here, in a tale of middle-aged angst and literary desperation, all the themes and stylistic experiments of Mr. Amis's earlier fiction come together in a symphonic whole."

"Misinformation in Reviews of The Information" WORD | PDF

Francine Prose in the New York Times, 27 February 1994. Excerpt: "The articles in Martin Amis's latest collection of essays have the range and appealing ragbag variety of work done on assignment. Indeed, as he writes in the introduction, the only thing that unites these pieces is 'getting out of the house.'''

"Time Runs Backward to Point Up a Moral" LINK | PDF

Michiko Kakutani in the New York Times, 22 October 1991. Excerpt: "Mr. Amis creates a devastatingly specific portrait of the Nazis' warped mentality: only in a completely upside-down, backward world, he suggests, are their actions comprehensible. Unfortunately, the bulk of the novel seems like an extended setup for this emotional payoff -- pages and pages of sophomoric humor laid as groundwork for one huge philosophical point."

"Slouching toward Auschwitz to be born again" WORD

James Wood in the Guardian, 19 September 1991. "Amis's profound book adds a new and terrifying dimension to the Shakespearean tragic conception of time out of joint."

James Wood in the Guardian, 7 September 1991. "He is a small man with a big head, a big voice, and an even bigger reputation: he's the most brilliant British writer of the late 20th century. What's more, he knows he's good. James Wood assesses the talent of Martin Amis."

"Lust Among the Ruins" LINK | PDF

Bette Pesetsky in the New York Times, 4 March 1990. Opening: "Is the world in for a rosier future, or are we just kidding ourselves? Martin Amis, unregenerate, is determined to send us plummeting into darkness. With evangelical ardor, he sets his sixth novel, 'London Fields,' in the grimmest of times. The approach of a global catastrophe he simply calls 'the Crisis' provides the background for a bitter tragicomedy of life in a world going noisily to hell."

Carolyn See in the New York Times, 17 May 1987. Excerpt: "A word about Mr. Amis's style: it's rough, new-seeming, laconic, lower-class,insolent, careless. You do not have to wear a three-piece suit to write about the nuclear world, Mr. Amis suggests, nor must you carry a sign to protest it. Just put your brain into gear and pay attention. By doing that, Mr. Amis has created stories that please at least as much as they horrify."

Veronica Geng in the New York Times, 24 March 1985. Excerpt: "The plot of 'Money' is in a basic, grand tradition. A guy gets totaled. Maybe he survives - in comedy - but he's spectacularly brought down. What makes this book special and important is that it revitalizes its tradition. Its trans-Atlantic urban show-biz patter and smart literary patterns could have been just a jaded fast-lane bummer, a depleting ride in John Self's purple Fiasco -- 'a vintage-style coupe with oodles of dash and heft and twang.' But instead the book's dash and heft and twang serve a deeper energy, a reimagined naivete that urgently asks a basic, grand question: what on earth are the rest of us supposed to make of the spectacle of a fellow human getting totaled?"

Review of Other People

Evan Hunter in the New York Times, 26 July 1981. Excerpt: "I do not appreciate an obscure novel. The only clear signal such a book transmits to me is that a writer was either too lazy or too cowardly to reveal completely his mind or his heart. To me obscurity presumes the need for an academic middleman, an eager translator who will explain all to the sluggard reader and thereby become a collaborator in the act of creation."

Jay Parini in the New York Times, 6 September 1987. Excerpt: "'Success' is, finally, a distasteful book, full of loathing that the author seems not fully to have understood or drawn through the crucible of art."

Christopher Lehmann-Haupt in the New York Times, 16 January 1976. Excerpt: "Why does 'Dead Babies' -- with all its elegant verbal play, its nightmarish scenes, and its sexual savagery -- finally fail to stir much interest? Very simply for the good old reason that there's never any tension in the story. The babies are already dead at the beginning, and there's nothing for them to get but deader."


Reviews of The Rachel Papers

"The Rachel Papers: Not the Son of Lucky Jim" LINK | PDF

Grace Glueck in the New York Times, 26 May 1974. Opening: "Just 20 years after 'Lucky Jim,' Kingsley Amis's famously funny novel about life at a minor British university, his 24-year-old son Martin has made so bold as to produce a novel himself; though--to say it right off -- not really one to give a novelist father the sweats."